Our personal and/or cultural values might be an absolute or relative ethical set of values that we are devoted and committed to and which forms the very foundation of our ethical everyday actions. Our value system is a set of consistent values, priorities, good/bad parameters, crteria and measures of our daily behaviors, that is sourcing from and which are established by our personal belief system. 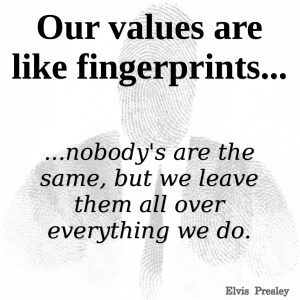 Values which are not physiologically determined are normally considered to be collective and applicable for all people, under all circumstances (i.e. the sameness dimension), which normally are values such as a desire to avoid physical pain, seek pleasure, to survive, happinessplugin-autotooltip__small plugin-autotooltip_bigHappiness Can Be Learned

A new study coordinated by the University of Trento shows the beneficial effects of an intensive program on happiness.

The results showed that several psychological well-being measures gradually increased within participants from the beginning to the end of the course. That was especially true for life satisfaction, perceived well-being, self-awareness and brainbrainfundamentalbrain, …etc. Values that are considered to be subjective, vary from one individual to another (i.e. the difference dimension) and across cultures (i.e. the similar dimension) are in many ways aligned with various belief systems currently in existence.

Any combinations of different value systems - regardless whether collective, individual or society based - include the following components…

Presently it is heavily debated whether some values - which aren't clearly physiologically determined - are intrinsic, such as altruism and whether some values, such as acquisitiveness, should rather be regarded as human virtues, rather than actual values. Values are the basis of our evaluations and judgments about what we regard as important in life. Values are an integral part of every person and every culture. Along with our world-views and preferred archetype, values determine our choices, direct our decisions and values are the justification for the actions we take, or reason for behaving as we do.

Being part of a cultureplugin-autotooltip__small plugin-autotooltip_bigWhich can be a nation, community, company, organization, team, family or group. that shares a common core set of values, creates collective expectations and predictability, without which a culture would disintegrate and its members would lose their personal identity and sense of worth. Values “tells” us what is good, beneficial, important, useful, beautiful, desirable, appropriate, …etc. Thus, values frequently answer - to a certain extent anyhow - the elusive question of why we do what we do. Values guide and direct us to solve common human obstacles for our collective survival.

Over time, these shared values become the roots of traditions that different groups of people find important in their day to day lives. Values can be positive (i.e. nourishing) or negative (i.e. toxic) and sometimes even downright destructive, especially when values are opposing or resisting change unconditionally. To really understand individuals of other cultures, we should come to understand the values, beliefs and assumptions that motivates their behaviours. Communities, groups, societies or cultures (either “physical and real” or “virtual and implied”) have values that are largely shared by all its members. These values identify those objects, actions, conditions, behaviours and/or characteristics that members of the society consider to be important and that what is valuable. The values of a society can often be identified by observing and noting which individuals collectively receive honour and respect.

Professional athletes at the top levels in some sports (e.g. rugby, soccer, tennis) are honouredplugin-autotooltip__small plugin-autotooltip_bigIn the form of status, monetary payment, special privileges and various bonuses. more than teachers and university professors for instance. Sad as it is - in essence - our western-capitalistic culture value “excellence through sport” much, much higher than personal growth and the development of the human spirit. Further more, how much time, money and effort is spend in entertainment and gambling centers, in comparison to places of worship and learning? Just a bit shocking, isn't it!

There is a huge difference between value clarifications and cognitive moral education. Values clarification is guiding individuals to clarify the meaning of their life's and what is worth working or striving for. Individuals are encouraged to clearly define their own values (i.e. compile a personal value statement) and to respect the diverse values of other people and groups of people. Cognitive moral education is based on the premises that individuals should learn - even by brute force if necessary - to value things like democracy, patriotism, some form of organized religion and justice as the basis of their value system. The latter develop, establish and sustain shared umwelt's sourcing from common strata values which allows for the harmonious existence of communities, societies and nations. Providing… that such a value system isn't basically dogmatic in nature.

Values are integrated with personal and cultural norms, but values are more general and abstract than norms. Norms are rules for behaviour in specific situations, while values identify what should be judged as good or evil, better or worse, right or wrong.

People take part in a culture (i.e. real or virtual) even when cultural values do not entirely agree with personal values. This indicate our ability to synthesize and extract aspects valuable to us from the multiple subcultures that we belong to. However, when and individual expresses a value that is in serious conflict with the group's norms, the group's authority may carry out various ways and means to encouraged conformity or stigmatizing the non-conforming behaviour of its members.

In our modern society there are frequent and ample references to the term “Highly Evolved Values”. The term “highly evolved values” is generally used, assuming that it implies “special”, “much better”, “more civilized”, “superior” and “enlightened”. However, within real life - objectively and contextually examined - no one value or value system is worse, better than or superior to any other value system. Apart from universal values (i.e. sameness dimension) all other values are merely a question of views, opinions, perception and personal interpretationsplugin-autotooltip__small plugin-autotooltip_bigI.e. the value lies in the eye of the beholder. .

With the above in mind, what is actually implied by “highly evolved values”?

Highly evolved values are values that is properly digested, incorporated and clearly defined measures as the platform of our purpose for and meaning of our life's. Thus, “highly evolved values” are the basis of or stern foundation for the personal believe system that we obey; regardless the many pressures from the external world and despite possible outside opposition, the values that we stick to with dedication… even when “nobody” is watching us. Highly evolved values are the essence of and the foundation for doing the right thingplugin-autotooltip__small plugin-autotooltip_bigDoing the right thing:

Means doing things in the manner as expected, needed or required to be done, often as a result of majority consensus.

EXAMPLE: To ensure a safe flight, a pilot must do things right. . Thus, highly evolved values allow and “subtly force” us to become a better - rather than just remain a good - person.

INNER SELF: The authentic me, G R I T: Our dedication and endurance